- NAMED BY APPLE AS EDITORS' CHOICE AND ONE OF THE BEST APPS OF 2012Layout makes it easy to arrange your photos, tell stories, and share with friends.Swipe your finger to ... Read More > or Install Now > 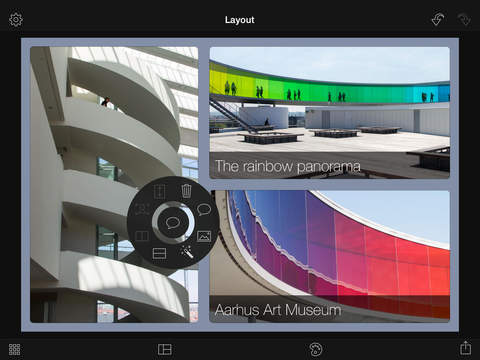 Layout makes it easy to arrange your photos, tell stories, and share with friends.

Swipe your finger to quickly split a frame into sections, and use the radial menu to add photos directly from your photo album, Facebook, and Flickr. Enhance images with built-in filters and effects, adjust saturation and contrast, add some stickers, and a whole lot more. Then, add a caption to each photo, apply a background color or pattern, and share your layout with friends and family via e-mail, Facebook, Twitter, and Flickr. If you want to go back, Layout includes undo and redo, and best of all, you can store your projects in iCloud to share them with other devices.

Layout runs on iPad 2 or later and iPhone 4 or later.

Easy Editing
• Enable iCloud to share your documents and settings with other devices
• Use undo and redo to safely experiment and play
• Open photos directly from your photo album, Facebook, and Flickr.
• Use automatic face detection to frame a group or move from face to face
• Select an overall shape using built-in aspect ratios or customize your own
• Choose from a set of included templates or create your own template for later use
• Switch templates and let Layout automatically fill them with your photos
• Precisely align borders at quarters and thirds using automatic snap points
• Snap borders so that they align with each other

Photo Effects
• Touch-up your photos using the built-in photo editor
• Apply artistic effects to transform your photos and set the mood
• Crop, rotate, and flip images to focus on the most important part of your photo
• Automatically enhance photos that were backlit or taken at night
• Adjust brightness, contrast, saturation, and sharpness for the perfect image
• Remove redeye, erase blemishes, and whiten teeth for a professional look