Raystorm 2.0.8 for iPhone and iPad

Raystorm for iPhone and iPad

You can download the the latest version of Raystorm. 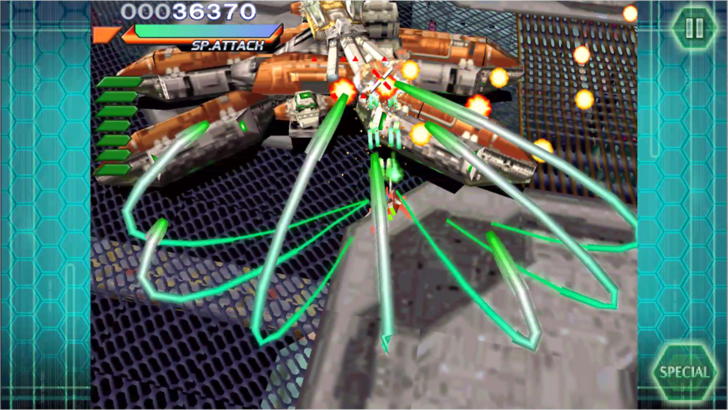 TAITO is famous for arcade shooting games, and the RAY trilogy is one of its most beloved series! Beloved for its beautiful 3D graphics and exhilarating pace, the series’ second installment (following RAYFORCE) is now available in app form!

*Two Shooting Methods: Auto and Manual!
Auto Mode provides automatic, button-free firing for both the standard weapon and lock-on laser, allowing players to take on this challenging game with a single finger.
-When impacted with special Attack gauge accumulated, Round-Divider activated by auto! You can avoid the shot of your aircraft!
Manual Mode adds weapon controls (a toggle for the standard shot; fire buttons for the lock-on laser and special attack), providing a more arcade-like play experience.

*Support MFi Bluetooth controllers!!
Key configuration is also possible! You can place 'Shot', 'Laser' and 'Special attack' on your easy-to-operate button!
(When using the controller and playing Remix Mode,you can change the speed of your ship from OPTION > Move Ratio.)

*Choose between two ships: the R-GRAY1 and R-GRAY2!
RAYSTORM features two playable ships, each with different combat capabilities. The R-GRAY1 boasts powerful shots, while the R-GRAY2’s lasers are capable of locking on to a greater number of targets. Choose the ship that best suits your play style!

*RAYSTORM's enchanting soundtrack is back!
One of the highlights of the original RAYSTORM experience was its sound design, perfectly replicated here under the supervision of TAITO's ZUNTATA sound team. In addition to the classic soundtrack, this edition includes special TANZMIX renditions!

*Game Center Compatibility!
Individual rankings have been prepared for each ships and for each game mode.
Let's compete with high-score players from all over the world!
Get Achievement fulfilling various conditions in game! Aim for Achievement Complete!!

**Nortification**
This app is intended for the iPhone 4s or newer,iPad mounted VRAM 1G or more,and running iOS version 8 or newer.

*Made the graphics high resolution. You can play on a more beautiful screen!

*Added a arranged BGM by MASAKI(ZUNTATA) on Area1!