NBA Escape 1.2 for iPhone and iPad

“NBA Escape is awesome. It’s like if Angry Birds played basketball. And not only is it incredibly fun, but you actually do some good for the world just by playing. Five Stars.”—Chris Paul, ... Read More > or Install Now > 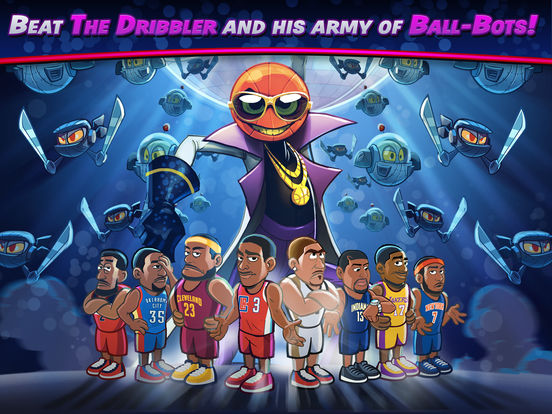 “NBA Escape is awesome. It’s like if Angry Birds played basketball. And not only is it incredibly fun, but you actually do some good for the world just by playing. Five Stars.”—Chris Paul, NBA All-Star

“This game is my jam. You don’t even have to like basketball to love it. But who doesn’t like basketball? Seriously. I want names.”—Paul George, NBA All-Star

“NBA Escape is dope. I’m a huge gamer and I’m addicted… I’ve played through all the levels and can’t wait for more. I LOVE THIS GAME!!!”—Roy Hibbert, NBA All-Star

“This is hands-down the best game ever made. Download it now if you know what’s good for ya Jive Turkey... Muah ah ah ah!!!”—The Dribbler

WARNING: This game is rated TRIPLE-F. It contains extreme amounts of “fun, funnyness and funkiness.” (In fact, we recommend you consult your physician to determine if you can handle such a high concentration of funk.)

It’s the start of the NBA season and the league is in jeopardy! The Dribbler has kidnapped the top players and it’s up to you the save them by completing some of the craziest trick shots ever devised!!!

The fate of the NBA is in your hands. So... how’s your game?

NBA Escape is a super fun physics game that features both puzzle-solving and skill-based levels. Get ready to play as little versions of your favorite stars in an epic adventure... of miniature proportions.

• Face Over 200 of the Dribbler’s Dreaded Doom Rooms and His Army of Gnarly Gizmos… The Ball-Bots!

Plus, the more you play, the more donations you’ll raise for worthy causes, including The Boys & Girls Clubs of Greater Washington’s Youth of the Year scholarship program and Shoes That Fit, which provides new shoes to school children in need. Pretty cool, huh? Download it now and find out how!

This application may require internet connectivity and subsequent data transfer charges may apply.

This game may include:
• Direct links to social networking websites that are intended for an audience over the age of 13.
• Direct links to the internet that can take players away from the game with the potential to browse any web page.
• The option to make in-app purchases. The bill payer should always be consulted beforehand.