Published by The Game Bakers

SQUIDS Wild West has a unique mix of action strategy and RPG: build your team of heroes for challenging turn-based battles against corrupted crabs and shrimp! This sequel is even better than the ... Read More > or Install Now > 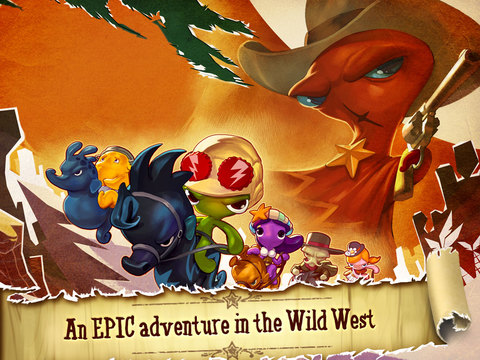 SQUIDS Wild West has a unique mix of action strategy and RPG: build your team of heroes for challenging turn-based battles against corrupted crabs and shrimp! This sequel is even better than the original, with many surprises in store: devious new enemies, four new playable characters, and nearly twice as many levels. You can even ride seahorses into battle!

The Squids are back: bigger and better! The epic adventure continues as our band of stretchy heroes explore the underwater Wild West, fight back against the evil Black Ooze, and search for Winnick, their fallen comrade. If you don't know SQUIDS yet, SQUIDS Wild West is a great place to start!

What the critics say:
• Metacritic: Best iOS games of 2012
• TouchArcade: Best RPGs of 2012
• "A great adventure for hardcore RPG players, as well as casual iOS gamers, it provides hours and hours of great entertainment. It is definitely going to wind up on my top 10 games of the year list." The App Shack (5/5)
• "Its artwork, its animations, its character - almost everything exudes warmth and attention to detail. It is a labor of love, not just a product. And, most importantly, it’s fun." - GameZebo (5/5)
• "The adorable spawn of Angry Birds and Final Fantasy Tactics" -The Escapist

Features:
• Brand new chapter in the funny and exciting SQUIDS saga
• Unique mix of turn-based tactics and classic RPG elements
• An epic adventure: hours of gameplay with varied missions and boss battles
• Simple controls: grab Squids by the tentacles, then fling them across the battlefield
• Four character classes with different abilities: shooters, scouts, troopers, and healers
• Recruit your own Squid army among 12+ playable characters
• Equip your Squids with special ability-boosting helmets
• Universal App with iCloud syncing—play on any device and store your progress!

For the latest SQUIDS news, or to ask us a question, check us out on Twitter @TheGameBakers or Facebook/SquidsTheGame

No Squids were harmed during the making of this game. (But we can’t say the same for the shrimp…)