Sports Jeopardy! 2.1.5 for iPhone and iPad 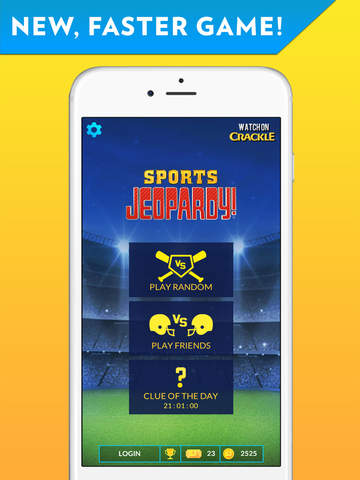 BRAND NEW UPDATE with lightning fast and improved gameplay. Now even better with a NEW Apple Watch app!
From the creators of America’s #1 Trivia Game and Emmy-winning TV show, Jeopardy!, comes the next level of competition with SPORTS JEOPARDY!

Are you a die-hard sports fan? Do you know all the stats from any sport, in any era? Dominate the playing field with Sports Jeopardy!, the ultimate TRIVIA game for all sports fans.

· Experience a faster, quicker and smarter game with our new social multiplayer game play!
· Power Ups: Boost your score with in-game Power-Ups to rise up the leaderboard. Use "Hat trick", “Double Play”, and "Free Throw" to up the ante.
· With thousands of Original CLUES from the TV show writers, Sports Jeopardy! will keep you entertained for hours!
· CLUE OF THE DAY: Come back daily to answer our special trivia for the day and be placed in the Hall of Fame Achievement board! Now play our daily clue challenge right from the Apple Watch!
· Connect your Facebook account to challenge friends, or just face-off against random players.
· Get instant notifications from friends on your Apple Watch!

If you have issues, questions, or comments please email us at gamesupport@spe.sony.com. We want to hear directly from you!