Draw It 1.1 for iPhone and iPad

You can play "Draw It" on iPhone/iPad now! Developed and published by FingerLegend. The owner of Hide N Seek, Death Run and many other famous mini games."Draw It" puts you in a game ... Read More > or Install Now >

More About Draw It Game 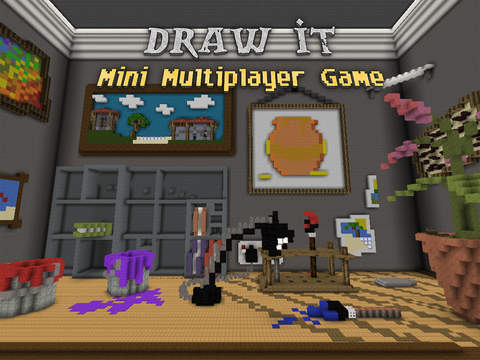 You can play "Draw It" on iPhone/iPad now! Developed and published by FingerLegend. The owner of Hide N Seek, Death Run and many other famous mini games.

"Draw It" puts you in a game against up to 23 other people with a simple goal: to be the best artist. Every player gets a chance to draw, and points are awarded for guessing the correct word, and having people guess your drawing correctly.

When a game starts, a player will be chosen to Draw. They will be given a random word, and a set of tools. In front of them, and you, will be a huge canvas. Using the tools given to them, it is their job to draw an image to help you guess the word... in under 60 to 100 seconds, depends on the settings of the room owner.

The quicker you guess the word, the more points you get. For every correct guess, the points go down - so speed is of the essence. BUT, please don't cheat. Have fun!

Graphics:
Also, this game has great graphics, as you can see in the screen shot. It supports SMOOTH SHADOW. In the game, you can set the FOV, sensitivity and many other options.

Simple controls:
- Touch DPad to move. Also you can choose the hide the DPad graphics.
- Use touchpad to draw on the screen. The content will shown on the stage wall immediately.

Game Features:
- Has many words in the database.
- Well designed game logic, players can join and leave the game at any time.
- Has servers in United States, Europe, Australia, Asia and Japan.
- Supports world wide multiplayer, each room can has up to 24 players.
- Great graphics, support smooth shadow. You can see the real screenshots below.
- Supports importing customized skins into the game.
- Supports both 64x32 pixels skins and 64x64 pixels skins.
- Supports colorful font in the name.