Rhythm Fighter 1.0.1 for iPhone and iPad

Rhythm Fighter for iPhone and iPad

You can download the the latest version of Rhythm Fighter. 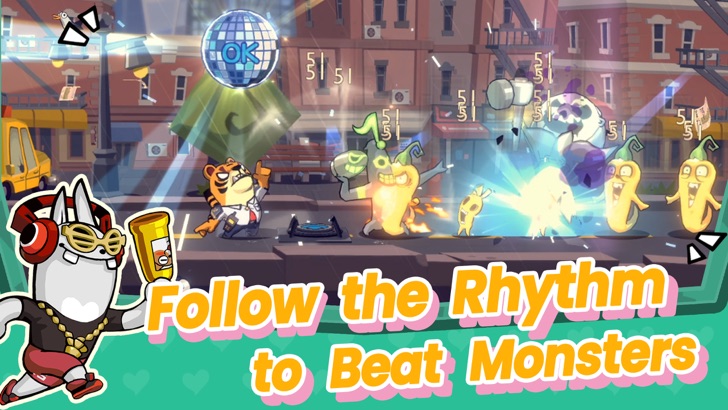 Rhythm Fighter is a unique gem blending side-scrolling action game with rhythm. Your job in the game is to “beat” 'em up in the literal sense. Hit, dodge, knock down, launch fiery combos, crush powerful enemies with dashing moves, while executing the whole sequence TO THE BEAT.

Commander Chaos, the most notorious Beatarain, is now targeting Planet Earth as the next step on his path to universe domination. Peace was a thing of the past for terranean veggies and animals before they knew it. With the power of the Dark Beat, Commander Chaos turned veggies into his minions. Many animal fighters fell victim to his reign of terror, as his minions wreaked havoc all over the place. The fall of Planet Earth seems inevitable.

This is the time where THE hero typically arrives. Yes! Here he is! The mysterious Mr. Disco, another Beatarain, is here to save the day! With the power of the Light Beat, he revived the fallen fighters. Not only that. He taught them how to fight. Feel the beat. Move your body. Plan your moves to the groove and save the world with style! But! Is Mr. Disco doing all this out of altruism? We shall see...

[Features]
- Tons of roguelike elements
Procedurally generated stage maps with plenty of surprises, hundreds of randomly-dropped unique skills and weapons. Every run is your first run.

- Match them up for numerous possibilities
A huge roster of quirky fighters. You’ve got trendy DJ, special agent, elementary schooler... The list goes on. Every each of them looks and plays differently. Weapons x skills x items. Option overload! Wield powers even you don’t know you have! Hundreds of Beat Cards with effects are INDEFINITELY stackable. Build your deck till it’s over the top. What the Fun!

- Expertly adapted to smartphones
We tested it on many brands and models and gave it a mobile-friendly interface.