Devouring Stars 1.3 for iPhone and iPad

Harvest stars and fight with black holes in a magnificent RTS set into the cosmos.Devouring Stars is a real-time strategy game based on adaptative unit combination and space resources ... Read More > or Install Now > 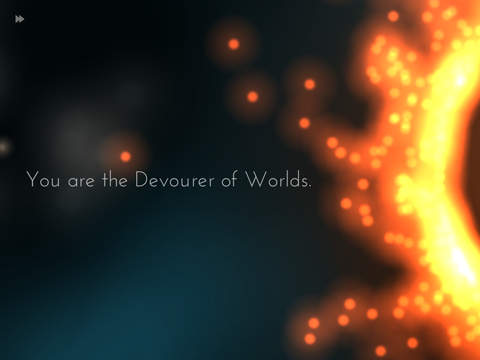 Harvest stars and fight with black holes in a magnificent RTS set into the cosmos.

Devouring Stars is a real-time strategy game based on adaptative unit combination and space resources harvesting. Devouring Stars aspires to bring a different scope to the RTS genre while offering visual and audio refinement.

In Devouring Stars, you play a tribe of godlike entities trapped in Tartarus, a corner of the universe as far beneath hell as heaven is high above the earth. Hunted by 4 other tribes, you have been given the ability to draw your own fate. But to what extent?

To defend themselves, those entities have the ability to devour space starfields and create dynamic protective nebulae, or to merge to grow into more advanced units with special abilities (freezing enemies, taking control of them, attacking them from afar, etc.). Depending on the set of entities a game is started with, different strategies may be unfolded.

Devouring Stars is mainly inspired by Dan Simmons' Illium but also by games like Homeworld, Eufloria, Starcraft or Faster Than Light.

“A minimalist RTS, but one that doesn't lack for depth of strategy.”
- IndieGames