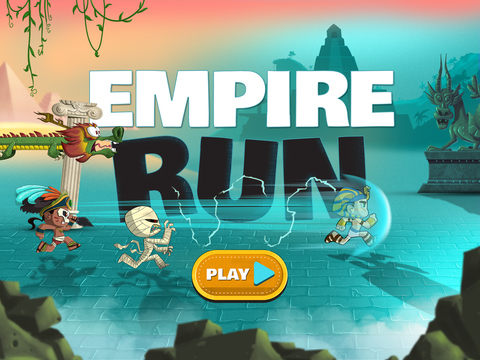 Empire Run is part of Planet H -- a new brand from HISTORY, created for kids to explore historical topics and eras through play.

In Empire Run, take on the role of a local high school track star when he falls asleep cramming for a history test. Now, trapped in the dream world of history, he must use his quick reflexes to sprint across, over, and under obstacles in dynamic courses from five historical empires. Collect “Did You Knows” to learn about each empire and its effect on the world. Collect coins to use the Power Dash and leave your enemies in the dust!

Do you have what it takes to sprint through history, or will you be stuck in the dream world of the past? Download Empire Run today and see if you can make it through all the levels and learn about the great civilizations of the past!

Special Game Features Include:
- Play through five Eras of Ancient Empires.
- Collect D.Y.K. facts across this and all other Planet H games.
- Each empire has three types of challenges: Race, Destroy and Survive.
- One-touch controls keeps you focused on the action.
- Race against mummies, gladiators, lancers, and more!
- Master the Power Dash to stay in the lead.
- Colorful animation keeps history fun, bright, and alive!