Swingworm 1.4.0 for iPhone and iPad 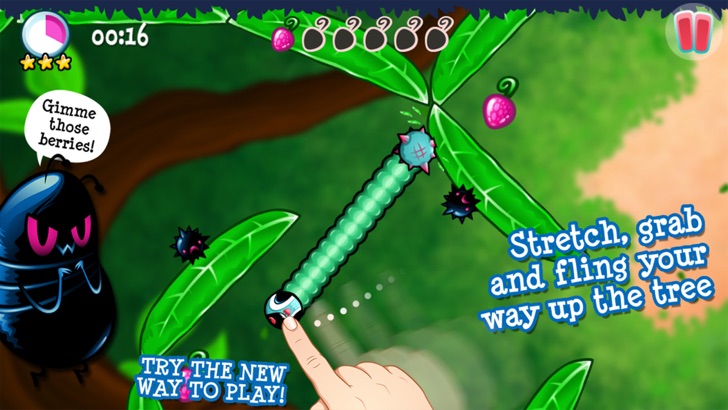 SWINGALICIOUS! Swing, stretch, smash and grab your way through exciting, physics based worlds! Simply grab Swingy's head or tail and SWING IT!

"Swingworm ends up being a game that’s extremely easy to recommend for gamers of all ages."
5/5 - The App Shack

"Swingworm is a worthy purchase for anyone who enjoys experiences only possible on a touch screen."
3/4 - Slide To Play

"For anyone who enjoys an action-puzzler, but is tired of variations of the same themes over and over, this is a solid pick up with a lot of promise."
4/5 - 148apps.com

Featured in the "Intuitive Controls" category by Apple

Meet Swingy, the brave hero of the most swinging tale of all time!

It is spring in the Whispering Woods, and like all swingworms of his age, Swingy wants to climb the highest tree of the forest – the tree that goes all the way to the Moon.

There is just one obstacle: The berry-hoarding Big Bug and his spiky minions...

Swingworm features unique controls. Swingy's head and tail will tenaciously grab surfaces, and his stretchy body allows him to reach surprisingly far. It's a race against time as Swingy gathers Rubbaberries to pay the Big Bug for an elevator ride further up the tree.