Unicycle Boy 1.3.0 for iPhone and iPad

"Give Unicycle Boy a try, it is truly a hidden gem." - 1WaySwimFrom the creators of Bird Jumper comes Unicycle Boy, a physics based adventure game with level building and awesome balance ... Read More > or Install Now > 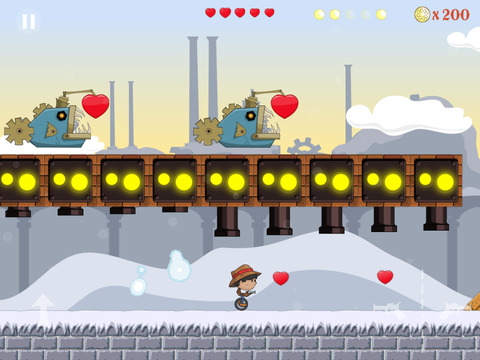 "Give Unicycle Boy a try, it is truly a hidden gem." - 1WaySwim

From the creators of Bird Jumper comes Unicycle Boy, a physics based adventure game with level building and awesome balance controls. It's a wondrously weird mix of creativity, cleverness, and difficult but rewarding gameplay.

Unicycle Boy is a bit different. It was built from the beginning on the unique idea of "riding around on a unicycle with a handgun shooting weird bad guys". The developers sustained numerous injuries learning how to ride a unicycle for "research purposes". There's no birds, candy, or 50 tokens for just $4.99 *shudder*; it was built by guys that still play Mario, so it's old-school hard and old-school fun.

Why it's fun:
- Shoot an enemy, roll a rock over him, or push him off a cliff. You play how you want.
- Build your own levels.
- Levels are built by hand, and each one is different.
- Unique piano soundtrack.
- Play levels made by other players and find out what they've cooked up.
- No menus, pop ups, or long tutorials. Just play.

Why you might NOT like it:
- It can be challenging. Balancing on a unicycle is not easy!
- You can't pay to win! Seriously, you can't! If you want to beat the game you have to actually, you know, beat it.
- Buying the game might cause the developers to do more research, which will likely injure them again (just kidding, bring it on).