The Survival Games 1.6 for iPhone and iPad

THE REAL HUNGER/SURVIVAL MINI GAMES IS ON IOS NOW! PUBLISHED BY THE DEVELOPER OF HIDE N SEEK:MINI GAME WITH WORLDWIDE MULTIPLAYER.Please watch video at: ... Read More > or Install Now >

More About The Survival Games Game 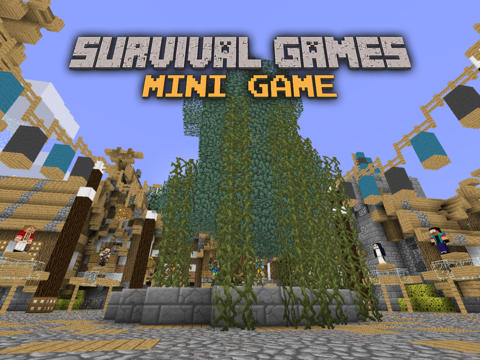 THE REAL HUNGER/SURVIVAL MINI GAMES IS ON IOS NOW! PUBLISHED BY THE DEVELOPER OF HIDE N SEEK:MINI GAME WITH WORLDWIDE MULTIPLAYER.
Please watch video at: http://youtu.be/KtLqzsHBN00

Survival games is a really famous mini game. It is a gametype built around the core of Minecraft. 24 players are spawned with nothing on a large map, with one goal: to find the chest, find the weapons and armors. Then kill others. You can use the materials to craft your weapons and armors. Or your team members can drop weapons or armors to you. You can form teams or choose to be an individualist loner. Just remember, the best stuffs are hidden in the corner.

Game Feature:
- Support large maps. The engine is power enough to load and render the whole world.
- Support worldwide multiplayer. Up to 24 players can player together in one room. Of cause, you can chat in the game.
- Support four teams: Red, Green, Blue, Yellow, and a "Individual" team. You and your friends can be in the same team to fight other players together!
- You can craft weapons, armors and so on.
- Can drop items to the ground, and pick up items from ground. So you can give weapons or armors to your team members.
- Great graphics, you can see the screenshots here. They are all captured in the game. Also, you can change texture package to change the appearance.
- Support uploading your favorite skins to be used in the game.
- Support jumping, dashing, sneaking animations.
- The initial version contains two maps, more and more maps will come out in next updates.

What's New in The Survival Games 1.6