Galaxy Alliance 1.0.12 for iPhone and iPad

Join the ENDLESS PvP battles for galactic domination in Galaxy Alliance. PLAY FOR FREE in the most addictive and sci-fi social strategy game!FEATURES:-Immerse yourself in rich ... Read More > or Install Now > 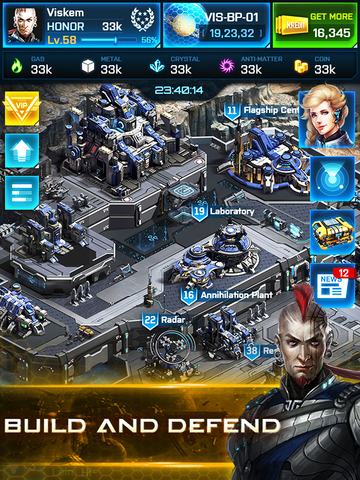 Join the ENDLESS PvP battles for galactic domination in Galaxy Alliance. PLAY FOR FREE in the most addictive and sci-fi social strategy game!

FEATURES:
-Immerse yourself in rich visuals and animations
-Develop your planet into an untouchable force
-Manufacture warships of mass destruction
-Improve and refit warships
-Research technologies for planet development and warship upgrades
-Fight alongside alliance members in war rallies
-Explore the mysterious galaxies in challenging campaigns
-Whether it's mining, military missions, campaigns or just chatting, there's always something to do

5/5 “Very addicting! You can never get bored the game, so much to do. Alliance's are talkative and friendly!”
5/5 "A lot of work put into this app! Hoping for lots of new stuff with the updates!"
5/5 "Amazing game, so well thought out, runs perfectly and is very fair"
5/5 "Lots to do plenty of space battles. It is worth downloading"
5/5 "I downloaded this game a few days ago, and it has quickly become my favorite mobile game."
5/5 "The UI is very clean, the gameplay is pretty solid. It's pretty much Game of War with a space twist, however in my opinion it's a lot better."
5/5 "So I'm reading that this is a new game, which kind of excites me because, who doesn't want to watch a game grow into something great? So far I like it. Simple but not too simple. It holds your attention & that's enough for me"
5/5 "One extremely addicting app"