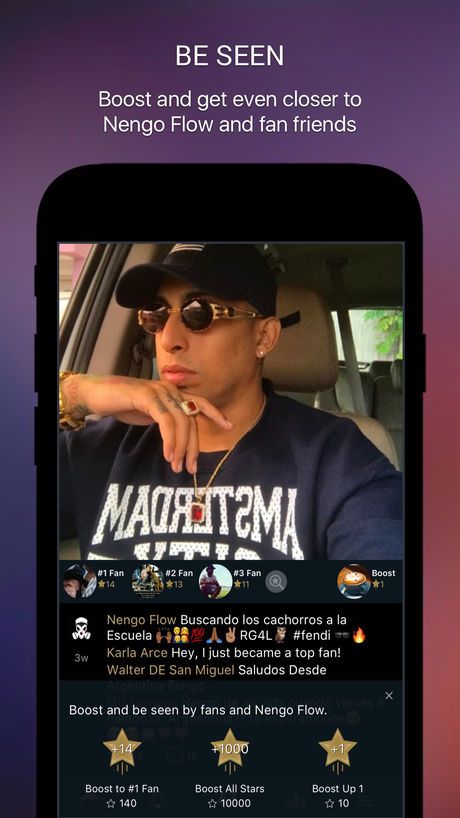 Stay connected to Nengo Flow on his official app.
Do fun things:
- Check out the in-app social feed for live updates and videos.
- Boost your comments with Superstars, become a Top 3 Fan, and be seen by Nengo Flow.
- Join exciting contests for a chance to win amazing prizes like meeting Nengo Flow, event tickets, and more…
- Watch cool videos.
- Follow Nengo Flow on social media.
- Listen to the FREE built-in playlist and add more songs from your personal library, Spotify.

We’ve just launched a subscription service! Get the exclusive subscriber badge to decorate your avatar, access subscriber-only content and post pictures and videos to the Fan Feed! The $2.99/month subscription fee will be charged through your iTunes account as an auto-renewable, recurring transaction unless you cancel your subscription 24 hours before the end of the current subscription month. You can manage your subscription, cancel it, or turn off auto-renewal at any time by accessing your iTunes account.
When you sign up for the subscription service for the first time, you receive a 7-day free trial at no charge to try out the service. The free trial ends 7 days after you subscribe regardless of whether or not you’ve used the app.
Privacy Policy and Terms of Use: https://www.escapex.com/legal

About Nengo Flow
Edwin Laureano Rosa Vazquez Ortiz (born October 15, 1981), known professionally as Ñengo Flow, is a Puerto Rican rap and reggaeton singer-songwriter. He was born in the Río Piedras district of San Juan, Puerto Rico and grew up in Bayamón, Puerto Rico where he would get his start in the music business. It was there that from a young age he would develop interest in the world of urban music. His lyric content came from personal experiences in his neighborhood with other children and classmates. It is not until age 14 when Edwin Rosa was first presented on stage in the neighborhood where he lived in a community movement. There he discovered his mission and dream in life to be an advocate of life in the neighborhood and the streets in his town vent to his experiences in his lyrics.

After a few years the name “Ñengo Flow,” became known, baptizing the name as a subject of his community. His beginnings as an artist started by releasing a mixtape with colleagues and friends. It came to be heard on Univision. This allowed him to easily release his first studio album Flow Callejero in 2005. He would continue to release mixtapes including El Combo Que No Se Deja in 2007 and La Verdadera Calle in 2010. He would also appear on various reggaetón compilation albums including Los Anormales (2004), Sangre Nueva (2005), DJ Joe - Abusando del Género (2006). In 2011, he launched his highly acclaimed mixtape Real G4 Life and in 2012 Real G4 Life 2 as well as a Real G4 Life 2.5. Real G4 Life 2 peaked at number 75 on the Billboard Top Latin Albums chart while the 2.5 edition peaked at number 61 on the same chart. Also in 2012, he would appear on various artists' album including Ivy Queen's Musa while also providing uncredited vocals to the song "La Killer".