If you want to make the best possible decisions in your fantasy football league this year, then you need RotoWire’s Fantasy Football Assistant. It’s a comprehensive in-season tool that will give ... Read More > or Install Now > 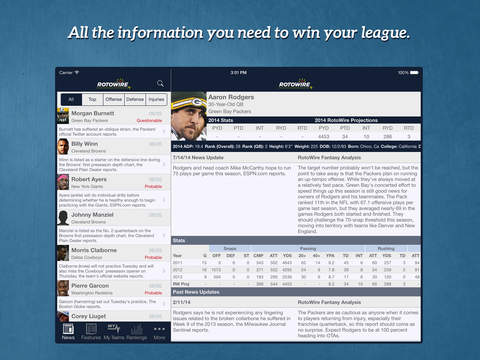 If you want to make the best possible decisions in your fantasy football league this year, then you need RotoWire’s Fantasy Football Assistant. It’s a comprehensive in-season tool that will give you access to the latest fantasy football news and information.

In other words, it’s a one-stop shop for everything you need to dominate each week during the season.

RotoWire.com has been the leading source of premium fantasy sports information on the internet for over 15 years. Over the past few years, our writers have won three times as many awards as the next closest competitor. We talk fantasy sports daily on our Sirius-XM radio show and also provide fantasy news to many of the leading online sports sites.

Note: You DO NOT have to be a RotoWire.com subscriber to use this app.

► ABOUT THE 2014 FANTASY FOOTBALL ASSISTANT

Here are few of the features:

- Ability to access our up-to-date fantasy football news and analysis with hundreds of recent updates.
- In-depth player detail pages with recent yearly stats, recent game stats, player outlooks, as well as go back and view all of RotoWire's updates for a given player.
- My RotoWire section with ability to create watch lists, view projected stats, my player news, weekly rankings, watch list stats and manage watch lists directly from the application.
- Articles and blogs written by some of the premier fantasy football writers including Chris Liss, Jeff Erickson, and more.
- Weekly and season player rankings with breakdowns by position. Know who to start each week and who to pick up as a free agent.
- View depth charts for every team.
- Enter your league settings to import your team, including best available/best lineup. This feature is supported for leagues running on the following services: Yahoo, ESPN, CBS, MyFantasyLeague, RTSports and NFL.com. (Note: We can't support accounts with two-factor authentication enabled)
- Watch lists that sync with your league.
-MFL’s most added players.
-Push notifications for your teams and leagues.

We stand behind the quality of our apps with email support - (support@rotowire.com). Buy it now and you’ll have all the fantasy football information you need throughout the entire season.