Can’t get enough football? Watch full replays of NFL games from your iPad or iPhone with a subscription to NFL Game Rewind. Relive all the excitement from the 2014 Regular Season and Playoffs with ... Read More > or Install Now > 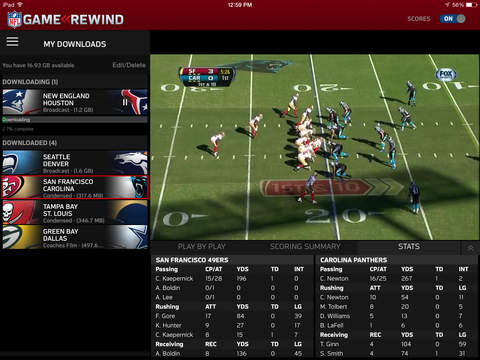 Can’t get enough football? Watch full replays of NFL games from your iPad or iPhone with a subscription to NFL Game Rewind. Relive all the excitement from the 2014 Regular Season and Playoffs with access to games streaming on demand in HD from every NFL team. All from your iOS device.

With NFL Game Rewind, you can follow your favorite team(s) and get closer to the game than ever before with features such as:

• Full Replays of Football Games: Stream all 2014 NFL games on demand in HD with full play-by-play commentary
• Condensed Games: Watch entire NFL games from snap to whistle in approximately 30 minutes
• Big Play Markers: Cut right to the action with unique indicators for every touchdown, field goal and game-changing moment
• Coaches Film: See exclusive “All-22” and “End Zone” camera angles and have access to Telestrator feature (iPad only)
• Scores: View scores from around the league (Includes the option to turn scores on and off)
• Schedules: Find exactly the game you want to watch with user-friendly interface
• Statistics: Full box scores of archived games and stats for your favorite NFL players
• Downloadable Games: Download and watch broadcast or condensed games offline
• NFL Fantasy Weekly Pick’em: Who will win the game? Test your skills in this weekly challenge
• NFL Fantasy: Keep track of your NFL Fantasy players and stats while you watch games

Designed to optimize the specifications and capabilities of your iOS device, the NFL Game Rewind app offers fans an even better platform to catch every minute of NFL football.

For customer support please reach us at: twitter.com/NFLGameRewind or visit (gamerewind.support.nfl.com) to live chat with a support specialist.

*Requires a paid subscription to NFL Game Rewind. Does not include access to live NFL games. To learn more, visit NFL.com/GameRewind.